Songwood and other works

Neither sentimentality nor romanticism, themes so commonly found in depictions of the rural, are present in the work of Orla Barry. There is no rural idyll found here, but, at times, there is a sense of what could be described as a premonitory elegy, a lament for things still present, but so clearly on the edge of disappearance that they might almost as well be gone. Orla Barry is a hybred, an artist/farmer. Her installation consists of a number of interconnected objects – “STOCKPILE” (2020-22) is a large mound of unsold, un-scoured Seafield Farm fleeces from her 220 sheep. Barry never sold these fleeces due to the below rock bottom prices offered for them. Elsey (2021) Elsey (2022) are two dark brown fleeces which stand alone from the pile. The title came from the first sheep Barry ever owned, an orphan lamb who she raised with a bottle. Together, the fleeces fill the gallery space with the warm scent of lanolin.

Songwood (2022), is a plank of London plane tree lumber. The tree removed from O'Connell Street in 2002 to make way for the Luas tramline. Hand painted lyrics to a song written by Orla Barry titled Primal Counterpoint (2022) adorn its polished surface. The song composed by Paul Bradley also plays nearby on a megaphone and describes the intimacy working with an animal, the struggle of care, of enforced tenderness, impatience, swearing and occasional violence. Barry is a sheep farmer and returned from Belgium to live on her father's tillage farm in 2009, where she established a pedigree Lleyn sheep flock in 2011, which she presents at livestock shows through which she has built a reputation for quality livestock.. Lleyn sheep are ‘eco sheep’ renowned for their milkiness and strong maternal qualities unlike some of the more traditional terminal breeds. The materials used in her work are all connected to her farm and the environment around it. The whole body of work captures the grit and slog of farm labour, the sunblock, stale sweat and damp, the tools scattered wide like broken teeth, at the end of a long hot day. Barry's relationship with her rural heritage is visceral, pragmatic, and playful, but nuanced enough to also be confrontational.

The shorn fleeces are a symbol, a universal concept; they represent energy, time, labour, commerce, world trade and economics. Yet they also refer to mismanagement, waste, and ecological degradation. Beside the heap of fleeces is a large vinyl image of a wool jumper, upon which is printed a wool merchant’s experience of the wool trade until it became unprofitable. Titled The Wool Merchants’ Calculator & The Curators' Jumper (2022), the narrative describes how fleece filled sheds have now become storage units for flat packed furniture. The story is printed on to a photograph of an Aran jumper knitted in 1974 for the curator of this exhibition and Director of the RHA, Patrick T Murphy, by his aunt Rose Byrne. In this assemblage of works, Barry calls attention to our misplaced priorities within capitalist systems and highlights how such systems have the power to turn those who work with the land and the oral histories they hold dear, into what she describes in three large painted aluminium text works as Shepherd, Scavenger, Slave (2022). 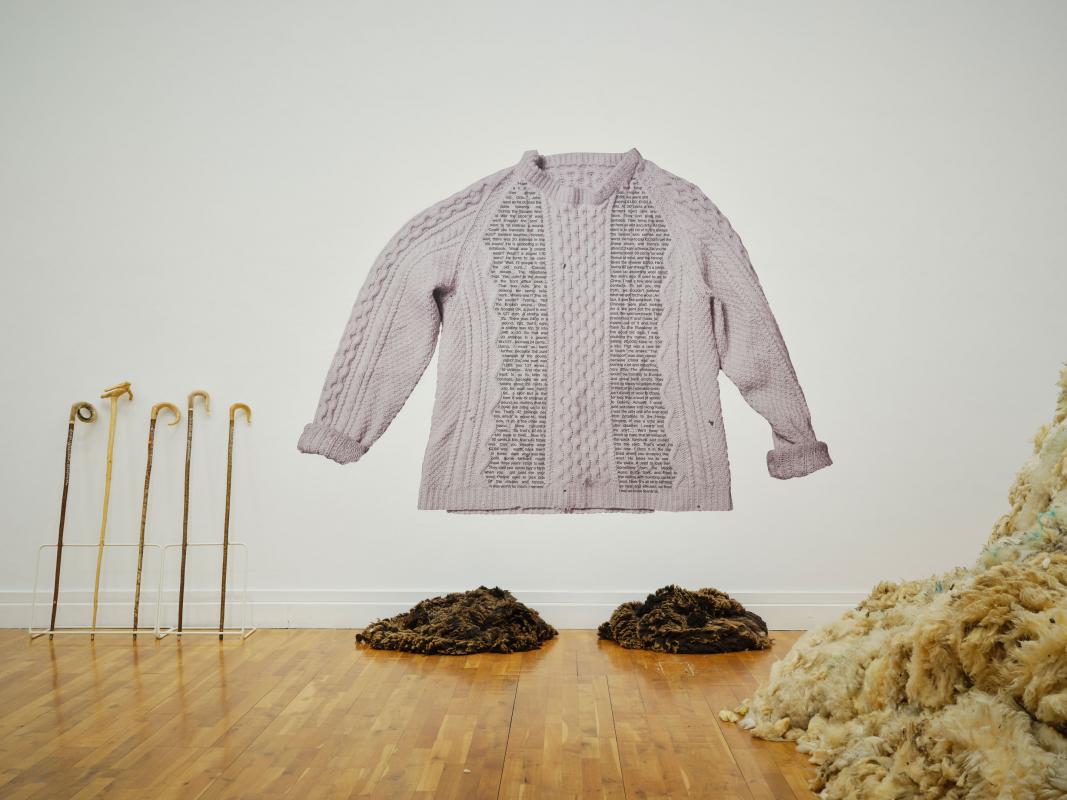